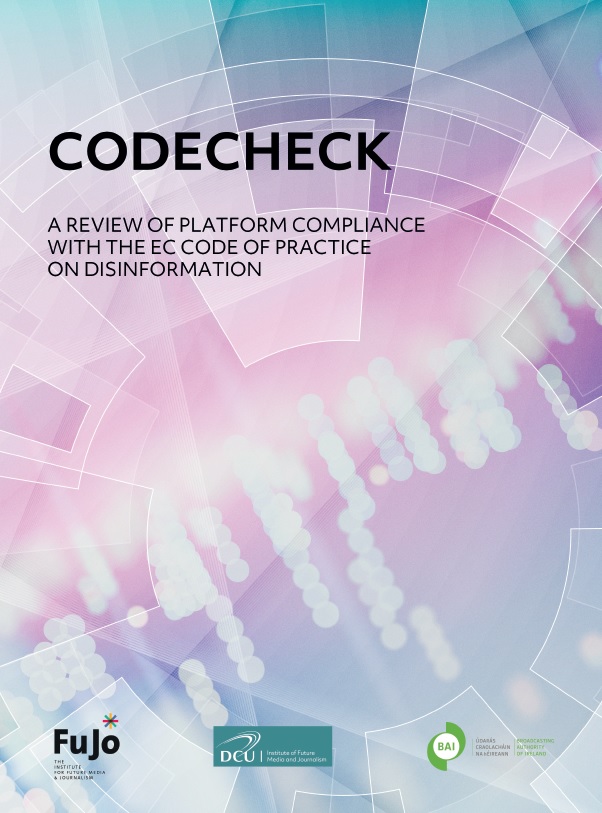 Greater commitment to the labelling of trustworthy content by digital platforms is required to empower consumers and reduce the harmful impact of disinformation on society. That’s according to CodeCheck 2020, a new research report, commissioned by the Broadcasting Authority of Ireland (BAI) and undertaken by the Institute for Future Media and Journalism (FuJo) at Dublin City University (DCU), which was published today (28.04.20).

The research examined the progress of Facebook, Google, Twitter and Microsoft as they strive to increase their accountability for the content that is carried and promoted on their services in Ireland, through their commitment to the self-regulatory European Code of Practice on Disinformation. The Code aims to address the spread of online disinformation and fake news. The research was undertaken as part of a wider EU project, designed to assist the European Commission in monitoring the effectiveness of the implementation of the Code.

As part of the research carried out by FuJo, efforts made by Facebook, Google, Twitter and Microsoft to reach their commitments to the Code in Ireland over a 12-month period to November 2019 were analysed and evaluated. Research sought to verify whether actions outlined in European-wide self-assessment reports submitted by each of the platforms had occurred in Ireland during the time period. The research focused on commitments in the Code on the empowerment of consumers and the research community. A previous report published in September 2019 had a specific focus on political advertising during the 2019 European Parliament elections.

The report found that while the four platforms have introduced various actions aimed at empowering Irish consumers, the level of engagement is mixed and inconsistent. Actions carried out included: mechanisms to report fake news, providing greater information on the content visible on the platforms, greater control and transparency in relation to advertising and user preferences, and the promotion of authentic and authoritative information sources. The report also found that supports in place for Irish research and academic institutions remain episodic and largely inadequate to assist in the delivery of any rigorous analysis and monitoring of online disinformation trends in Ireland.

FuJo Director, Jane Suiter said: “Our findings indicate that the most significant shortcoming of empowering consumers was the labelling of trustworthy content on digital platforms. Our researchers could not identify any news item across any platform that had been labelled as fact-checked with the corresponding verdict on its authenticity. This represents a substantial obstacle in assisting Irish consumers to make informed decisions when they encounter news online.

The research for this report was part of a larger project implemented by the European Regulators Group for Audio-visual Media Services (ERGA) at the request of the European Commission. The BAI chaired the ERGA sub-group during 2019 and continues to play an active role in the group.

Chief executive of the BAI, Michael O’Keeffe said: “The adoption of the Code of Practice on Disinformation was a significant development in the fight against disinformation in Europe and the report is timely, considering the harmful effect that disinformation has had across society during the COVID-19 crisis. It has brought into sharp focus the urgency at which digital platforms must engage more meaningfully with the Code.

“Although the report represents some progress in the monitoring of disinformation online, and comprehensive efforts have been made by Code signatories to provide greater transparency to consumers and the research community, it also indicates significant weaknesses in terms of the content and structure of the Code, and the processes for reporting, monitoring and enforcing the commitments, particularly at national level.

“As part of its involvement with ERGA, the BAI is active in the debates around the further evolution of regulation in the digital space and plays a leading role in the ERGA sub-group that is developing advice for the EU Commission on the transposition of the Audiovisual Media Services Directive and the new Digital Services Act. This is a fast-moving agenda where Ireland has an important role to play, given that many of the key platforms are headquartered here. The BAI is committed to engaging with the Irish-based social media platforms – and all stakeholders – to ensure the best outcomes are achieved for the citizens of Ireland and of Europe.”

About the report:
In April 2018, the European Commission adopted the communications policy ‘Tackling Disinformation: A European Approach’, which proposed the development of a self-regulatory code of practice for online platforms and the advertising industry to increase transparency and to better protect users. The Code of Practice on Disinformation was published in September 2018. Signatories to the Code, including Facebook, Twitter, Google and Microsoft, have committed to addressing five key areas: a) scrutiny of ad placements; b) political advertising and issue-based advertising; c) integrity of services; d) empowering consumers, and e) empowering the research community. ERGA is the body tasked with supporting the European Commission in monitoring the implementation of the five commitment areas – or pillars – of the Code. To do so, 13 national media regulators agreed to participate in the ERGA-led project, to monitor the implementation of the Code on a national level. The BAI commissioned FuJo to monitor the implementation of the Code in Ireland. The research was carried out in two phases: The first phase examined the political advertising activity on Facebook, Twitter and Google during the 2019 European Election campaign in the context of the platforms’ commitments to the Code to address the spread of online disinformation and fake news. That report – ElectCheck 2019 – was published in September 2019. As part of the second phase, each of the signatories supplied a self-assessment report detailing how it met its commitments under each of the pillars over a 12-month period. These reports detailed the European-wide efforts by each of the signatories to meet their commitments. Following this, ERGA members were tasked with analysing the reports to provide an evaluation of their content at a national level. CodeCheck 2020 is available to download here.