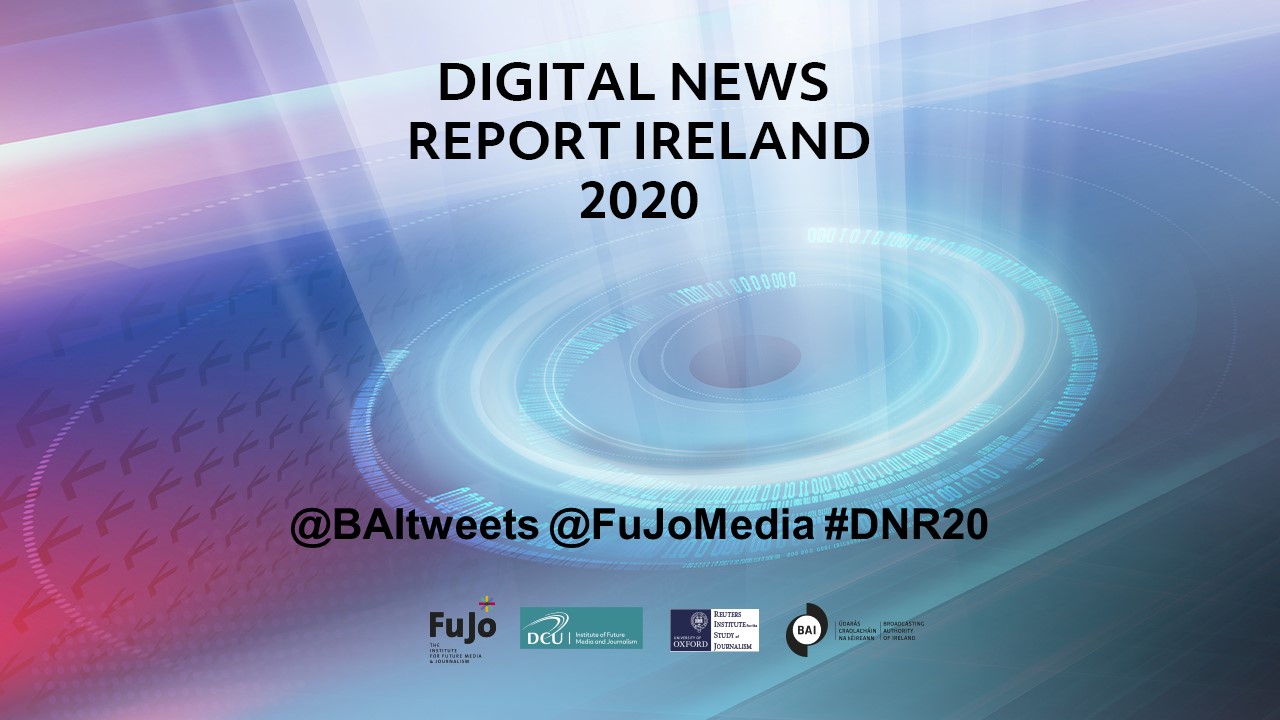 The Broadcasting Authority of Ireland (BAI) has funded the inclusion of Ireland in the Reuters Institute Digital News study as part of its work on fostering media plurality in Ireland. Covering 40 countries across the world, the study aims to understand how news is being consumed globally, with a particular focus on digital news consumption and the devices used to access the news. As in previous years, the BAI commissioned the Institute of Future Media and Journalism (FuJo) at Dublin City University to produce a specific report on the Irish results of the survey. The data for the research was collected in January / February 2020, ahead of the impact of COVID-19.

For the first time this year, the report looked at Irish news consumers’ interest in local news. It found that Irish news consumers appear to have a stronger relationship with local news than elsewhere in the world, with 50% of people saying they are interested in local news, compared with 31% in the UK, 45% in Europe, and 47% in North America. It should be noted, however, that there is a large variation between the size and character of local news markets in these regions. Local newspapers are the most used source of local news in Ireland, at 46%, with radio at 37%. A total of 70% of 18-24-year-olds expressed an interest in local news.

Podcasts: The research found a growth in listening to podcasts in Ireland, up three percentage points to 40% since last year. The under-45s are the largest demographic listening to podcasts, particularly 18-24-year-olds, 72% of whom said they had listened to a podcast in the past week.

Political advertising: 47% of respondents said that political advertising should be allowed on Irish television (it’s currently not permissible), while 35% said it should be allowed on social media platforms such as Facebook, Google and Twitter. In terms of journalism’s response to political commentary that is incorrect or misleading, 57% of Irish people think that the media should still report on the statement because ‘it is important to know what politicians have said’. A total of 65% of respondents in Ireland – on par with their UK counterparts – believe that digital media should take responsibility for the accuracy of political ads from which they profit. The EU average was 59%, while 49% of North American respondents agreed.

Trust in news: In 2020, 48 per cent of Irish respondents agreed they could trust most news most of the time, with 27% claiming distrust in media. This compares to a distrust level of 38% in the UK, 44% in North America, and 31% in the EU. The majority of Irish respondents showed a preference for objective, balanced news, with 56% getting news from sources that don’t have a particular point of view, and 14% seeking sources of news that challenge their point of view. This latter figure is higher than the UK (9%), North America (9%) and the EU (8%).

Paying for news: Paying for online news in Ireland remains static at 12%, which is in line with the rest of the EU. It compares with 7% in the UK and 18% in North America. Younger people, however, are increasingly paying for news online, with the highest rate of growth among the 18-34-year age group. Taking out an online subscription to a news title is the most common way to pay for news (40%), however, there has been an increase of five percentage points in the past year in those making a donation to a digital news service, up from 18% in 2019, to 23% in 2020.

Generation Z: Some 44% of those in the 18-24-year age bracket said they were very interested in news, with the smartphone being this cohort’s main device used for accessing news, and social media being their main source of news, followed by online (28%), TV (15%) and radio (4%).

Commenting, chief executive of the BAI, Michael O’Keeffe said: “Much has changed since the data for the 2020 Digital News Report was collected a few short months ago. One of the recurring themes for public health officials during the pandemic has been the importance of accessing reliable information from trusted sources. Thankfully, this report shows that citizens in Ireland have access to, and rely on, credible information provided by established news sources.

“However, there is no room for complacency regarding the sustainability of our news provision ecosystem. The fragility of the funding model that underpins the provision of indigenous news in Ireland has been a recurring theme in the Digital News Report since it was first published in 2015. Traditional revenue sources have been eroded and sustainable new ones have yet to emerge. While there is some evidence that online subscriptions have increased during COVID-19, it’s not clear if these will be sustained or if any additional revenue from this source will replace lost advertising.

“The BAI has responded to the funding crisis by providing €3.25m in targeted support to the commercial and community radio sectors and by releasing over €7m to the audiovisual sector in the recent Sound and Vision funding round. We are actively engaged in discussions nationally and at a European level about the provision of further supports for the sector, in accordance with the BAI’s statutory remit.

“As the Irish economy is being reopened, with COVID-19 still an issue, a sustainable media sector will be critical, and the BAI is committed to its ongoing support in this regard.

Director of FuJo, Dr Jane Suiter added: “This is the sixth year that Ireland has been included in this comprehensive international study and the Digital News Report (Ireland) is designed to capture the changing ecology of news in Ireland. Examining the role of news in the wider information ecosystem, the report focuses on the demand for quality news, the inclination to pay for this service, global innovations to support the industry, and on the role of the media in combatting disinformation. We hope that it will be an invaluable resource for academics, media owners, journalists and those developing policy.”

Notes to Editors:
• The annual Digital News Report by the Reuters Institute for the Study of Journalism at the University of Oxford is the largest ongoing study of news consumption trends in the world. The global report, covering 40 countries, will be available from Tuesday, 16th June at www.digitalnewsreport.org.

• The Irish report is sponsored by the Broadcasting Authority of Ireland (BAI) and compiled by the Institute for Future Media and Journalism (FuJo) at Dublin City University. The Reuters Digital News Report 2020 (Ireland) is available here. An infographic with top-line date is available here

• BAI chief executive, Michael O’Keeffe is available for interview on the BAI’s role in sponsoring the Irish research.

• Dr Jane Suiter, Director of the Institute of Future Media & Journalism at Dublin City University is available for interview on the findings of the Irish report.

• The study was commissioned by the Reuters Institute for the Study of Journalism to understand how news is being consumed in 40 countries. Research was conducted by YouGov using an online questionnaire in January / February 2020. Sample sizes in each country were assembled using nationally representative quotas for age, gender, region and education. The data was also weighted to targets based on census/industry-accepted data. The total sample size was 80,155 adults with around 2,000 per country. Ireland has 92% internet penetration and the sample size was 2,006.