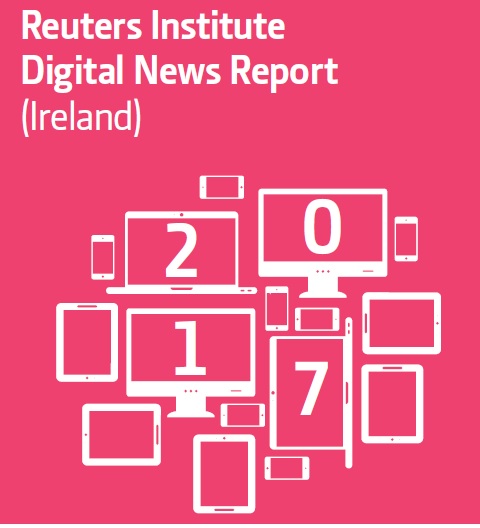 International research, published today (22.06.17), by the Reuters Institute has found that Ireland has a higher trust in news media than the international average. The survey of 36 countries found that 47% of Irish respondents trust the news media, compared with 41% internationally.

Meanwhile, just under a quarter (24%) of survey respondents worldwide said they think that social media do a good job in separating fact from fiction, compared to 40% for the news media.  In Ireland, the number of people who believe that news media does a good job is even higher, at 47%. The figure for social media is also higher among Irish respondents, at 28%.

Now in its sixth year, the annual Reuters Institute Digital News Report, published by the Reuters Institute for the Study of Journalism, reveals high levels of dissatisfaction internationally with the quality of news and comment generally, and on social media in particular.

This is the third year that the Broadcasting Authority of Ireland (BAI) has funded the inclusion of Ireland in the Reuters Institute Digital News Report, as part of its work on media plurality in Ireland.

Data relating to Ireland has also been the subject of a more detailed and specific report on the Irish results of the survey, produced by the Institute for Future Media and Journalism (FuJo) at Dublin City University and commissioned by the BAI.  The data for the research was collected between January–February 2017, reflecting the same data collection timeframe for previous years.

Key points arising from the Irish results include:

Private Messenger Apps: The major consumption shift was in the use of private messenger apps, such as WhatsApp and Facebook Messenger, which are used more in Ireland than in many other countries for general use, rather than for news use. Some 40% of Irish respondents are now using WhatsApp, 37% use Facebook Messenger, and 19% use Viber.

Interest in the News / Avoiding the News:  Irish consumers’ interest in news was consistently high over the last three years. 70% or more said they were extremely or very interested in news each year. At the other end of the spectrum, those not very or not at all interested in news were in low single percentage points each year. Interest in news increases with age. The 2017 report found that younger people are more likely to avoid the news than older groups. However, 41% of Irish consumers said they never avoid the news.

Digitalism and Traditionalism: Digitalists are those who consume news via smartphones, tablets and computers. Traditionalists mainly use newspapers, radio and TV. In 2017, Irish Digitalists fell 4% to 23%, whereas Traditionalists grew by 2% to 31%. Mixed users [Half and Halfers] increased by 1%, to 45%.

Sources of News: A breakdown of the sources of traditional news used in Ireland in 2017 shows that the country roughly mirrors the international average, with the exception of the relative dominance of the public service broadcaster. Some 66% of respondents indicated they use RTÉ as a main source of traditional news, compared to an international average of 49%. This carried through to the RTÉ News website, used by 34%, compared to an international average of 20%. Print was the most cited source of traditional news, at 70%. The top Digital Sources of news, The Journal.ie, Irish Independent Online and RTÉ News Online, all showed growth over the previous period with The Journal.ie and Irish Independent Online both increasing their share by seven percentage points.

Chief Executive of the BAI, Michael O’Keeffe said: “Promoting a plurality of voices, viewpoints, outlets and sources in Irish media is central to the BAI’s Mission, as set out in our new Strategy Statement 2017-2019. Contemporary research on how audiences are interacting with the array of news outlets and sources available today supports the objectives and outcomes from that Mission. In this context, the Reuters Digital News research project is a critical building block, both in terms of what it tells about the situation today, but perhaps more importantly, where we are heading. This research serves to recognise the complex challenges posed to traditional media by the growth of digital offerings.”

Commenting on the Irish results of the survey, Dr Jane Suiter, director of FuJo, said: “The Irish Digital News Report has been designed to capture the changing ecology of news in Ireland. We hope that this critical knowledge base will build into an invaluable resource for academics, media owners, journalists and those developing policy.”