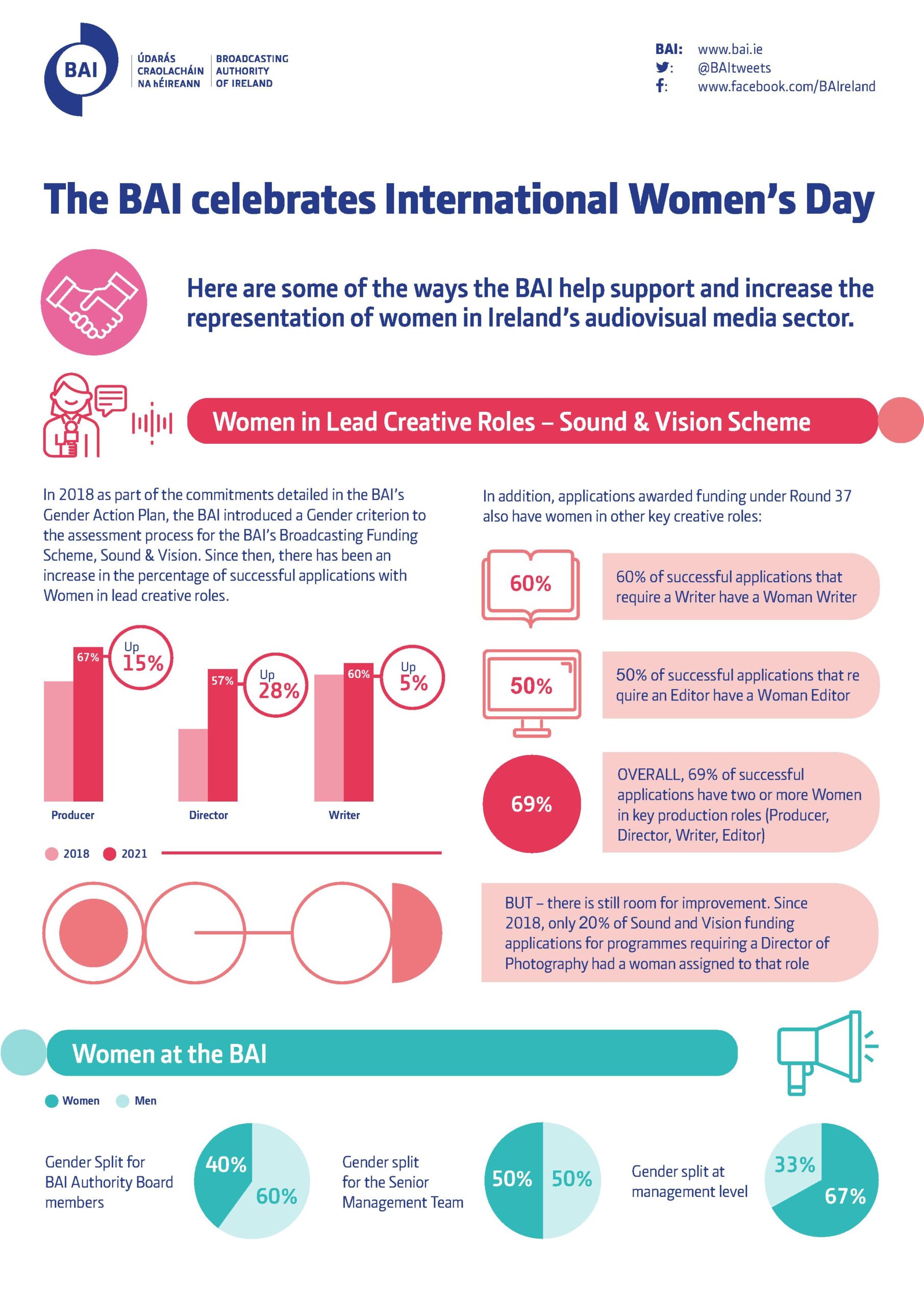 The Broadcasting Authority of Ireland has reported a 28% increase in the percentage of projects funded under the Sound & Vision Scheme featuring a female director since it introduced a gender criterion to the assessment process in 2018. The commitment to develop initiatives that enable women to increase their representation in media was given as part of the BAI’s Gender Action Plan. Some 58% of projects funded in the latest round of the scheme featured a woman director; 67% featured a woman producer (up 15%), and 60% featured a woman writer (up 5%). Some 54% of funded applications that required an editor featured a woman editor. Overall, 69% of successful applications featured two or more women in these key production roles. In addition, since 2018, 32% of Sound & Vision funding applications for programmes requiring a director of photography had assigned a woman to that role.

Commenting, BAI chief executive, Michael O’Keeffe said: “The BAI, as both a developer and regulator of the broadcasting sector, has a central role to play in promoting equality and diversity in the Irish audio-visual industry. One of our key objectives is that our range of initiatives under the Gender Action Plan result in quantifiable increases in female representation on- and off-air. The increase in female leads across the key production roles of director, producer, and writer is welcome. One area that has been identified for further development is the role of Director of Photography. The BAI will continue to engage with the sector to progress greater representation of women in this important role.

BAI senior manager with responsibility for diversity, Stephanie Comey added: “In addition to the introduction of the gender criterion, the BAI has also sought to promote ‘Women’s Stories’, running such a round in 2019 that resulted in funding for a range of programming, including Dating Amber (RTÉ); A Handful of Women (RTÉ Junior/Chill) and Dóchas – A place of hope (Virgin Media). In tandem with the Sound & Vision Scheme, the BAI also provides funding support to a range of initiatives to enhance women’s representation and leadership in the broadcasting sector. Past examples include X-Pollinator INCUBATOR – a female-driven development initiative for women in TV & Film and the ‘Media Database’, launched by Women on Air earlier this year.

“Examples of upcoming women-focused initiatives include The Writers Guild of Ireland – ‘Adding to your toolbox’ workshop for woman writers, due to take place next month and a ‘Breaking In And Breaking Through’ event, jointly being run by Women in Film and Television and the Writers Guild of Ireland. This will focus on female writers in film and television and will feature direct input from participants to discuss the AV industry and how to make a roadmap for a more equal and diverse industry.”

She added: “The theme of this year’s International Women’s Day is ‘choose to challenge’ and it is important that women’s voices are heard and that the status quo is challenged to create gender equality in the Irish audio-visual sector, which adequately reflects Irish society. The BAI, working in partnership with key industry stakeholders, is committed to promoting equality and diversity in Irish broadcasting and will continue to challenge for a better representation of women in the sector.”

An infographic setting out some of the ways the BAI helps to support and increase the representation of women in Ireland’s audio-visual media sector can be found here.