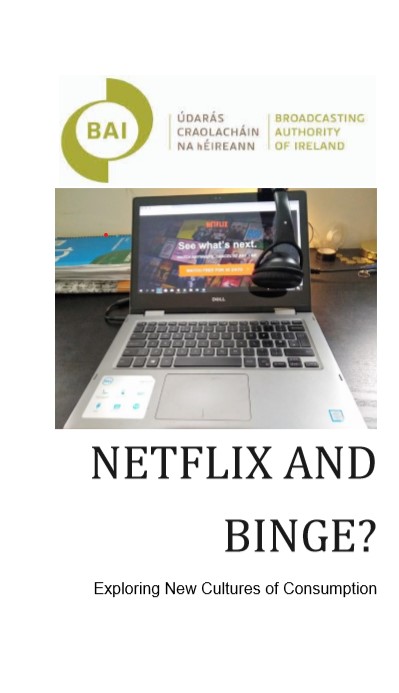 YouTube and Netflix are the most popular media for video consumption among the 20-55-year old participants in ‘Netflix and Binge?’, a new research study. The report, which was published today (17.12.19), was commissioned by the Broadcasting Authority of Ireland (BAI) and undertaken by researchers at Dublin City University (DCU) and University College Dublin (UCD).

The study, which was funded under the BAI’s Media Research Funding Scheme 2016 and completed this year, sought to identify new ways in which Irish audiences use and consume media, to inform relevant policy in the audiovisual media sector. To understand how audiences use and consume media, the study collected media diaries from 164 study participants and conducted seven focus group discussions, with diarists detailing their daily media consumption for one week and then discussing their records in group discussion settings. The main questions examined as part of the research are the types of media people consume; why they consume it; and how media is consumed.

While YouTube and Netflix emerged as the preferred media for video content for Irish audiences, social media was used for short videos, often humorous user-generated videos or animal videos. Although ever present, TV was considered a background medium, except for media events, such as sports coverage. Media players were used to catch up with missed favourite programmes, while radio featured in most diaries albeit mostly as a background medium.

The study confirmed several well-documented motivations underpinning media use and consumption, including use for personal and social identity, use for entertainment and use for information. However, the research also showed three novel or underexplored motivations: an instrumental use of media for work-related purposes, for example the use of social media to form work groups for projects or to communicate with colleagues; an educational use of media to receive instructions or in-depth knowledge about a topic, for example through YouTube tutorials or TED talks; and use for aesthetic gratification, which means the aesthetic pleasure that users derive from media consumption. The genre of documentaries was typically associated with this motivation.

Regarding the question of how users consume media, the research found that the rhythm of media consumption typically follows, rather than determines, the rhythm of everyday life. However, two exceptions, which break this routine and drive consumption, were identified: specific media events, such as sports coverage; and ‘intriguing stories’, stories that capture people’s imagination and pique their interest, leading to further media consumption. This includes, for example, breaking news or true crime stories on Netflix.

The research also showed that media consumption is a social process, which involves other people, even when users are alone. While usually conceived as individual members of a demographic group in policy and industry reports, the findings of this study indicate that users are part of social groups, communities and societies in a more general sense. This includes media consumption to communicate and be with others, and to reaffirm social group and community membership.

Commenting, BAI chief executive, Michael O’Keeffe said: “At a time of rapid technological change, it is important to understand developments in people’s media consumption habits, and to support research that tracks and examines these developments. This research project offers interesting and previously unseen insights into the viewing behaviours of Irish audiences, which will help to inform relevant policy in the audio-visual media sector. These insights are particularly relevant in the context of the revised Audiovisual Media Services Directive, which considers shifts in media consumption and moves to regulate video-on-demand services and video-sharing platforms. I would like to congratulate Dr Eugenia Siapera, Dr Niamh Kirk and Kevin Doyle on the publication of the report today.”

Lead researcher Dr Eugenia Siapera, added: “Determining the main motivations for media use and consumption as well as the significance, role and meaning of video and other media content for audiences are crucial for understanding the scope and role of future regulation. The main insight from a policy perspective is that audiences operate socially and not individually, and that media have expanded in almost all domains of life, from work to aesthetic appreciation.”