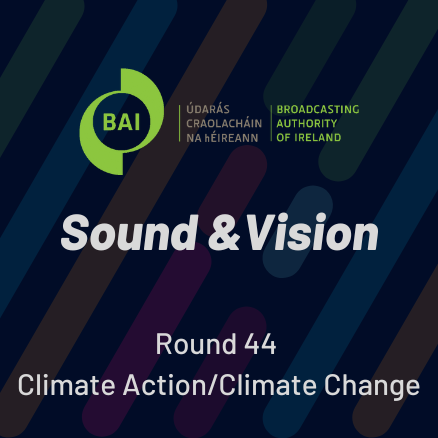 Almost €5 million has been awarded by the Broadcasting Authority of Ireland to broadcasters and programme makers around the country to support the production and broadcast of content which raises awareness of climate change and promotes action and behavioural change to combat it.

Round 44 of Sound & Vision, the Broadcasting Funding Scheme, was co-funded by the Department of Tourism, Culture, Arts, Gaeltacht, Sport and Media and the Department of Environment, Climate and Communications and delivers on a government commitment as part of the Climate Action Plan 2021.

Forty-one (41) applications were assessed regarding the public value they would deliver for viewers and listeners regarding climate literacy, innovation, the quality of the application and the resources proposed and the case made for funding.

A total of 25 applications have been successful and the funding will facilitate the production of ten (10) radio projects (€745,300) and 15 television projects (€4.1m).  Documentary and entertainment were the most popular genres funded (45% each), with the remaining projects falling under the education category. Five of the projects recommended for funding are in Irish or are bi-lingual. a quarter of the funded projects are aimed at the 15-34-year age group.

Commenting, the Chief Executive of the BAI, Celene Craig, said: “I would like to thank Ministers Martin and Ryan again for securing the additional funding for this round. The BAI believes that the funded projects represent a strong mix of high-quality projects that fulfil the round criteria to raise awareness of climate change and promote action and behavioural change to combat it. All the funded projects will also assist in achieving relevant CAP2021 objectives. There was good engagement by producers and broadcasters in the subject matter of this round.  Valuable learning has also been gained regarding climate literacy.  This information will be shared with the Broadcasting Sustainability Network and Media Literacy Ireland.

“The Sound & Vision Scheme, funded by the TV licence fee, continues to be a key source of funding for the independent production sector and a valuable source of innovative programming for public service, commercial and community TV and radio services. All the funding for TV projects will go to independent production companies while 6 of the 10 radio projects will be made by the broadcasters themselves.”

A full list of the projects being offered funding under Round 44 of the Sound & Vision Scheme is available to download here.