Broadcasting Authority of Ireland’s review of 2017 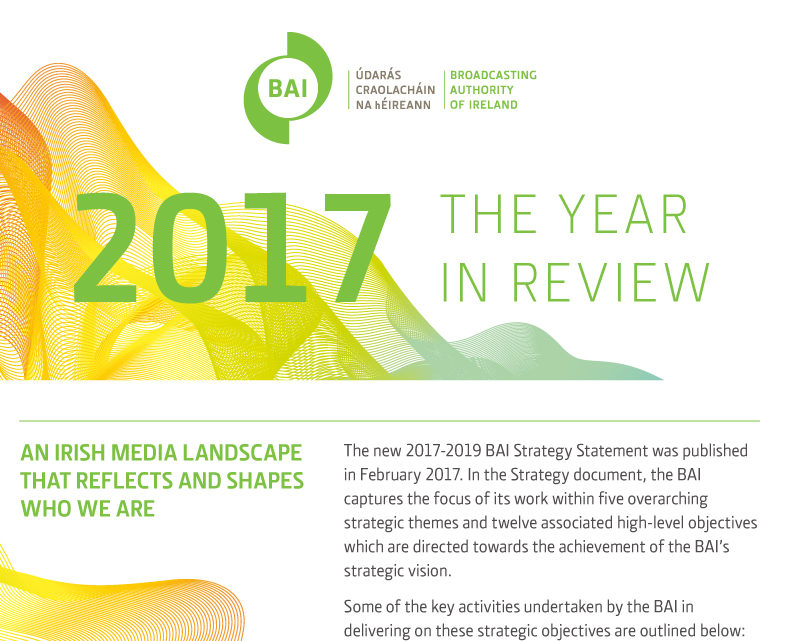 The Broadcasting Authority of Ireland (BAI) today (31st January) released its 2017 infographic, which charts much of its activity over the past year.

Mirroring the format of the BAI Strategy Statement 2017-2019, the infographic captures the work of the Authority over the past year under its five strategic themes: Promoting Diversity and Plurality; Communicating and Influencing; Empowering Audiences; Enhancing Innovation and Sectoral Sustainability; and Achieving Excellence and Accountability.

Commenting, BAI chief executive, Michael O’Keeffe said: “The BAI’s role is not just to regulate the broadcast sector in Ireland, but also to ensure that it reflects and shapes a modern Ireland. Our work in 2017 included allocating more than €11m from the television licence fee to quality radio and TV programmes on Irish culture, heritage and experience, improving media literacy and programming in the Irish language; allocating nearly €500,000 for training and development initiatives such as Women on Air, Learning Waves, and the Community Television Association; and sponsoring events such as the All-Ireland Radio Awards, the Choice Music Prize and the National Student Media Awards.

“We have a number of key activities planned for 2018, including the launch of referenda guidelines and public consultation on the Broadcasting Services Strategy and BAI ownership and control policy, and we look forward to engaging with sectoral interests and audiences alike over the coming year.”

A copy of the infographic can be found here.